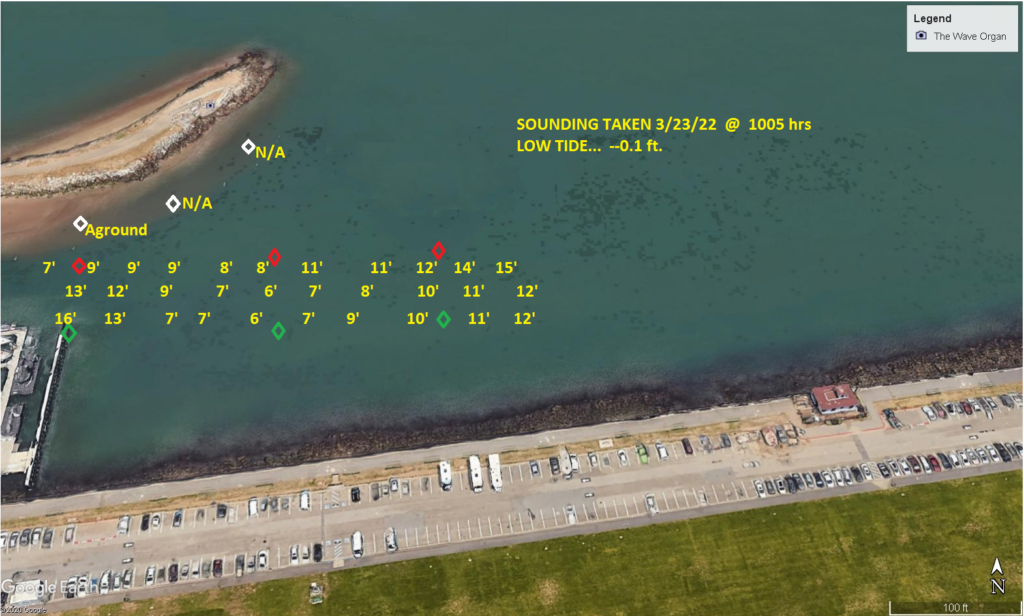 Please find the most current sounding report for West Marina, per Feb. 24th, 2022. 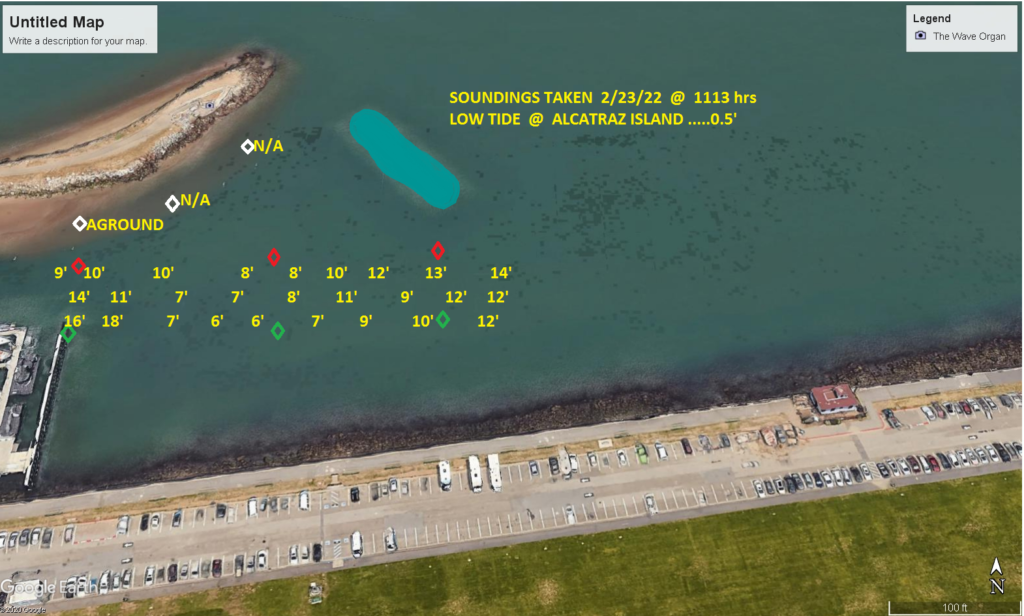 Boaters are advised that shoaling conditions can exist at the West Channel. Caution
should be taken at all times, especially at low to medium tides, to monitor depth on
entry and exit of the channel.

The lighted red and green PATON markers serve as a guide and aid to navigation, and
hazard buoys have been placed to warn boaters. Boats should always exercise
vigilance and caution in this general area when transiting the West Marina channel.

It is recommended that larger or deep-draft vessels traverse alone through the west
channel and monitor depths and speed.

During the winter and spring, boaters can expect very low tides in this area of the San
Francisco Bay until the allowable dredging window occurs in the summer/fall of 2022.

Prudent boaters should consult local tide tables whenever they expect to traverse
hazardous areas prone to shoaling conditions. The San Francisco Marina is happy to
provide boaters and the public with a complimentary 2022 Tide Book at the Marina
Office during business hours.

Please also monitor for swimmers, as they have been sighted in the open bay outside of
the West Marina Entrance. (Swimming is prohibited in the marina and the channel
entrance.)

Kurt Hemmingsen was re-elected as Secretary-Webmaster and Theresa Brandner was elected Director without opposition.
Besides the board members, there were almost 50 attendees which is about double the number who attend an in-person AGM.
Bruce Stone, the Treasurer, reported about $10K in the treasury fund and an increase in membership.
The proposed East Harbor sailing center was well received with a number of favorable comments.

In the meeting, Harbormaster Scott Grindy and Rec and Park Project Manager Kelli Rudnick reported on various initiatives,  Some highlights:

Berth holder bathrooms – BCDC’s EIR that authorized the West Harbor project specified two new berth-holder toilets in the west end of the harbormaster hut when his office relocates to the degaussing station. This document is attached.

At the east end of that building, there are two rooms for berth holders, each with two showers – one ADA-approved and one normal.  In November 2014, we proposed removing the normal shower and installing a toilet and sent drawings to the Harbormaster (see attachment).  Now, 8 years later, he has announced that Rec and Park will make this conversion.

The harbor entrance is getting narrow and shallow.  See the attachment of readings on 02-09-22 at a +0.8 tide. At a normal 0.0 sea level, just deduct 0.8 from these readings and you will understand what it means for a typical boat like a J/105 drawing 6.5 feet – running aground unless hugging the northern side and avoiding the green buoys.  Also, note that these readings taken by the harbormaster staff are rounded off to the nearest foot so could be 0.5 shallower.  In the areas marked 7 feet on this diagram, there could be just 4.5 to 5 feet of water at a low tide.  It will continue to silt in, and not be usable for keelboats in a few months.  Also, the channel marked by these buoys is in the wrong location as the dredging was done to the North, closer to the jetty.  For the past two years, we have been requesting these buoys be relocated in a curve to the North, guiding boats in a safer path, but the Harbormaster said that takes a year and is expensive to study and implement. The harbor’s budget runs from July 1 to June 30, and fresh funds become available in August; therefore the Harbormaster stated he must wait until next fiscal year to dredge.  We pointed out that the harbor is being choked off and we’re not getting the benefit of the bargain in the slip fees we pay.  We suggested that the Coast Guard and the Fire Department cannot get their larger boats into the harbor and nor can deep draft boats visiting for a cruise or passing through for a regatta, and it will get worse.  He said he cannot do anything about it, and to avoid transiting the entrance at low tide.

The BCDC EIR also counted on the continuation of the sandpit just outside the jetty to mitigate shoaling of the harbor.  The Harbormaster says that was handled by the Department of Public Works and is outside of his jurisdiction.

Kelli Rudnick, Project Manager for the East Harbor renovation, described the calendar for the project.  Concept design and community outreach in 2022-23, design and permitting in 2024, bidding and then vacating the harbor in 2025, and then a three-year construction period to 2028.  Berth holders would be expected to relocate to other parts of SF Bay.  The Department is reviewing three options but favoring not rebuilding the shallower south end of the harbor. We pointed out that rather than abandon that area, we favor building a platform to support a community boating center like in Alameda and Redwood City, with classrooms, showers, and dry boat storage for skiffs, dinghies, small keelboats, kayaks, paddleboards, and secure storage of boaters’ gear. This would generate rental income.  See attachment. We would seek funding from various corporations and foundations to cover the cost of lessons for SF public school children. We also believe the harbor needs a sheet-pile breakwater along the East axis, close to the adjacent Ft. Mason pier, to protect the harbor from northeasterly swells.  As this would also benefit Ft. Mason, we requested that the Department reach out to the National Park Service and our Congressional representatives for a cost-sharing program.

Fuel Dock – Kelli stated that the fuel dock would be relocated to West Harbor, near the pump-out station across from Golden Gate YC, so on our plan we drew in a launching area for dragon boats in the area to be vacated. However, on further study, we have learned that the Fair seawall along Marina Green is unstable and that it would be unlikely to support fuel tanks.  Also, the West Harbor area is congested, so adding commercial traffic in there for refueling would be unsafe for the large number of non-motorized boats sailing in and out of the harbor.  The best location is the current location in East Harbor, and we suggested that the Department dredge that section to accommodate it is staying there. 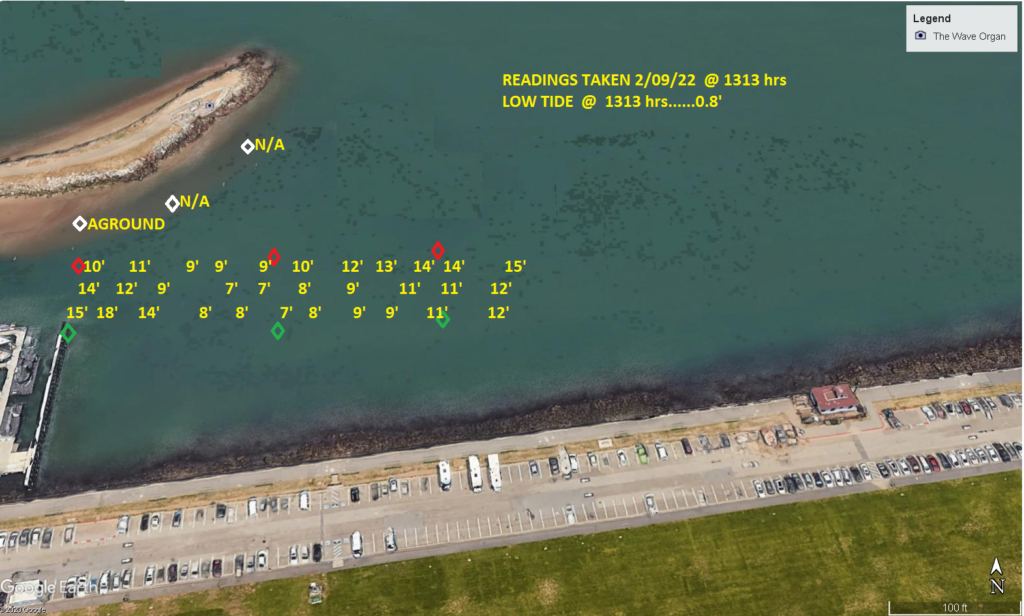 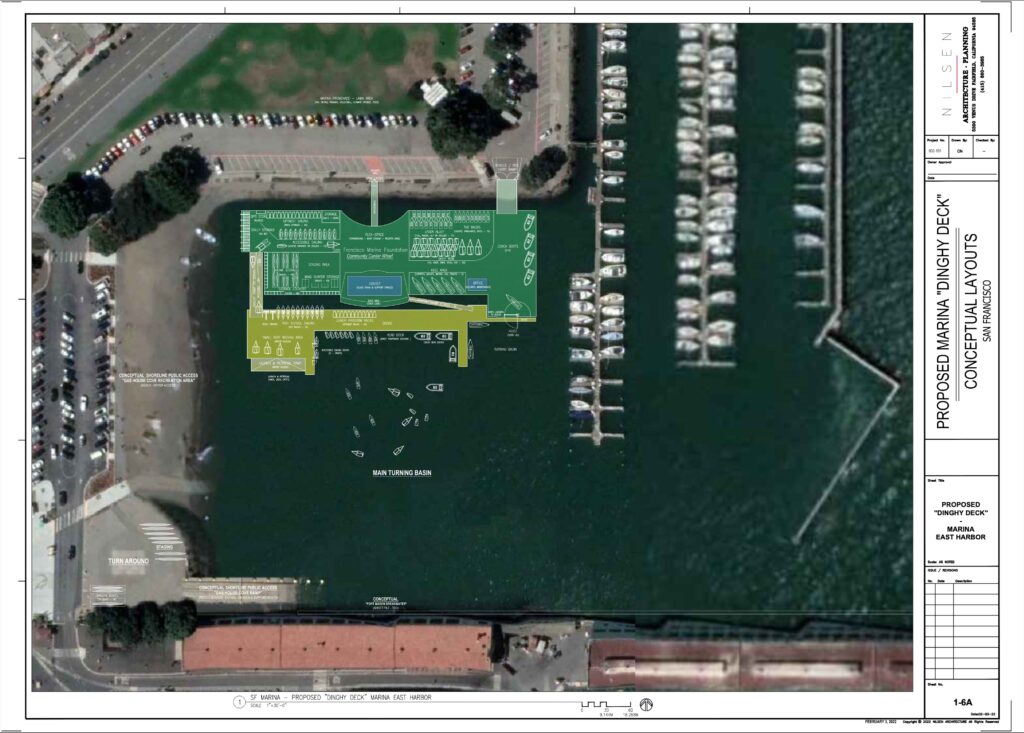 SF Marina Harbor Association presents a preliminary vision for a community boating center in the southern end of East Harbor where the City intends to abandon many berths rather than dredging there.

We are also recommending dedicated berth-holder bathrooms as well as a breakwater along the eastern edge to protect against surges. The conceptual design is depicted below.

Meeting Agenda
Kelli Rudnick, SF Rec & Park Project Manager, will explain the settlement with PGE and outline the anticipated timeline for the redevelopment of East Harbor.
SF Marina Harbor Association will present a preliminary vision for a community boating center in the southern end of East Harbor where the City intends to abandon many berths rather than dredging there.  We are also recommending dedicated berth-holder bathrooms as well as a breakwater along the eastern edge to protect against surges. The conceptual design is depicted below.
Harbormaster Scott Grindy will discuss the significant West Harbor entrance shoaling, overall security, parking, bathrooms, staffing, and a wide range of topics, plus take Q&A.
Election of Officers & Directors – Nominating Committee recommends:
President – Mark Hensley
Vice President & Treasurer – Bruce Stone
Secretary & Webmaster – Kurt Hemmingsen
Directors: Alex Mulder, Risley Sams, Theresa Brandner

Other nominations may be made during the meeting
Please RSVP to bruce@brucestone.com 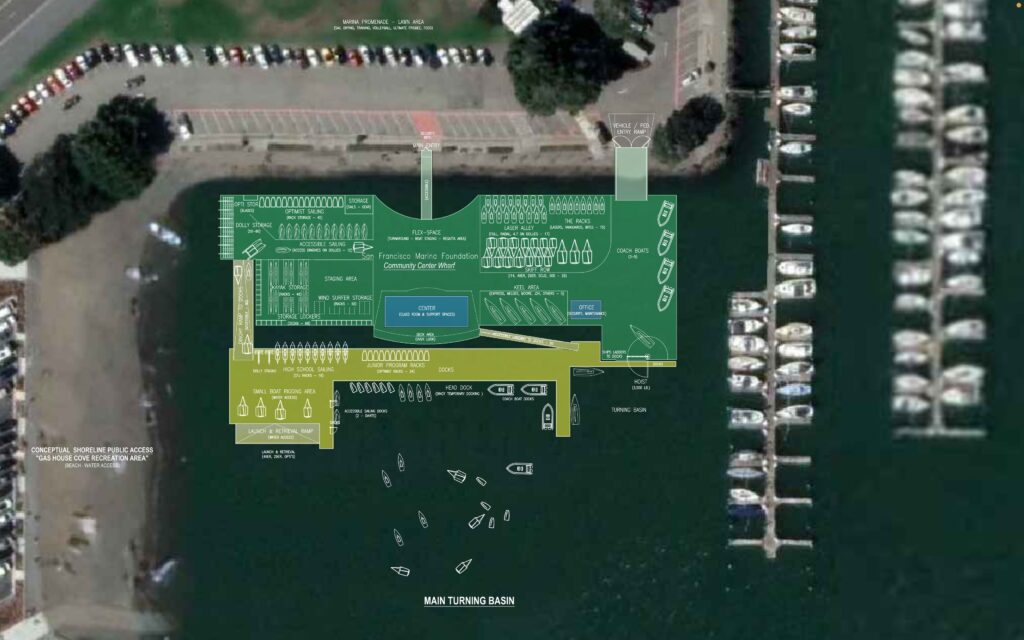 When entering West Harbor to go to the St. Francis or your own berth, there has been continued shoaling that can endanger your boat.  Since the attached photo was at +2.8 tide, well above low, the areas marked 8’ indicate only 5.2 ft depth, therefore you can hit bottom especially along the green channel markers along the south side of the channel.  Favor the red markers along the north side of the channel.  Also, you do not need to continue to the end of the “channel” as that’s not where they dredged the last two times; rather, they dredged closer to the wave organ and the channel should curve Northerly rather than a straight line going East-West.

In past decades, there was a sandpit off the end of the wave organ which then collected sand and prevented the harbor from silting in so quickly.  This sand was given away to a dredger who came in exchange for dredging it out.  That deal was dropped when the harbor was renovated, and the consequences have been dire for the harbor entrance, costing $500k or more each year for remedial dredging and even that has not been substantial enough to make solid headway against the problem, thought to come from sand off Ocean Beach and Crissy Field.

If you have an interest in learning more, and perhaps contributing to a solution, please join the SF Marina Harbor Association.  Our Annual Meeting will be on Feb 10 via ZOOM and we’ll be sending out notices soon to members.  See http://sfmarinaharbor.org/ for how to join, just $60 for three years.  We’re also looking for another director to join our Board. 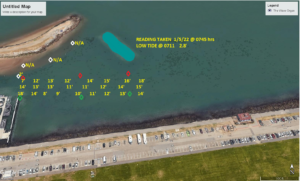 On July 25, 2021 the Harbor Master’s Officer released the most recent sounding report. The soundings taken on 7/25/2021 @ 0715 at -1.2 tide. Please note that this map is not intended for navigation purposes, try to enter and exit during high tides. 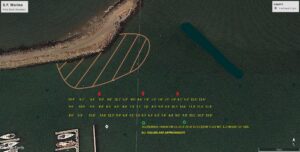 The association held our annual meeting via Zoom on Jan. 14th, 2021

Our Harbormaster, Scott Grindy was also in attendance and provided the association the annual report of accomplishments and plans for the current calendar year.

Highlights from the meeting:

View the recording of the meeting on our YouTube Channel: https://youtu.be/H8YTcQv9Vgo

Contact SFMHA Secretary, Kurt Hemmingsen should you have any questions.

Jan182021 by dksailor.kh
Association Notices, Blog
You need to login to view this content. Please Login. Not a Member? Join Us
Nov302020 by admin
Meeting Notices

Establishment of working parties on:
– Docks, gates, wi-fi, bathrooms, dredging – all physical aspects of the harbor
– Review and oversight of Harbor finances; operations, capital improvements, variance analysis – Actual versus Plan
– Rules and Regulations – out of date and need to be more rational
– East Harbor Project – light a fire under it!
– Communications to and among berth holders – social media, website, email, and meetings

Our nominating committee has proposed the following slate of officers, and we’ll take nominations from the floor:

Please share this notice with other berth-holders who might not be members. See you at the meeting via ZOOM on the 14th!